Phenom is a Progressive Rock band from Bangalore, India, formed in 2001, notable for being one of the first Indian rock groups to release their work under a Creative Commons license. While Phenom "categorises" itself as a Classic and Progressive Rock band, their music really spans many genres, and the talented members of the group have never allowed "categories" to limit their experiements in music. An example of this is their instrumental "Resurgence", which appears to be a metal number, with underlying prog rhythms. Another is the deceptively "ethnic" startup of "Unbound", which then goes on to build into an awesome crescendo of rock, metal, prog and and strong melodic overtones. And just when you think you have their style pinned down, they come up with "A Little Step" - a song about peace that is so completely different in style, yet uniquely recognisable as a Phenom song. Each component of Phenom's music is highly specialised and unique in approach and execution. The "lead bass" style of playing consistently wins awards. The drumming draws attention with tight, controlled and appropriately restless sequences, treating the kit almost like a lead instrument. The guitaring is an amazing blend of lead and rhythm guitar, creating a completely new and uniquely recognisable style. And the keyboards produce impeccable and accurately placed pieces of keyboard magic to "glue" their compositions together. 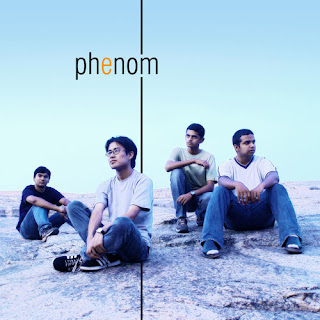