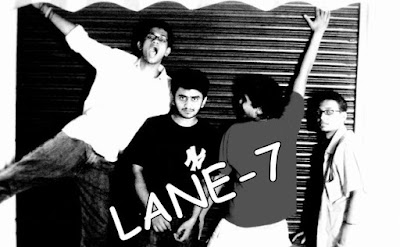 Lane 7 (L-7) is a Hindi Rock band from Baroda, formed in 2008 with a dream to bring a new kind of music among their state. The band came up with 4 college mates Nakul the lead to the band Nandish on rhythms Sagar the drummer of the band and Aariz the vocalist first three of them once met on an social site, they were from same college and thus tried to think alike in the kind of music and so came up wid an idea to form a band. Having a confusion between pop / rock / soft rock band finally came up with the genre "hindi rock" the journey started from the end of the year 2008 competing for the first time in any competition band secured 4th rank all over india out of the 50 bands who participated in the battle at Mood Indigo 12/08(mantra). After that they played in many gigs in their city. But now the band has split as the member of it parted.