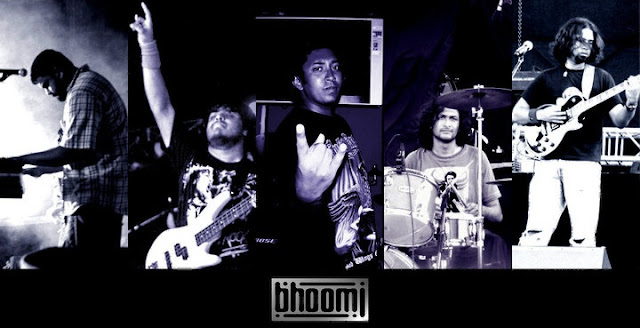 Bhoomi is a Progressive Heavy Metal band from Bangalore, formed in April 2002. The quickly rising to prominence in the Indian metal circuit and soon established a rapidly growing fan base all over the country. Arguably one of the most eclectic metal bands around, Bhoomi have since gigged extensively all over India building a reputation as one of the most enthralling live acts to have surfaced from the rising metal scene in the country. With their roots firmly entrenched in the classic metal of Judas Priest, Iron Maiden, Queensryche and other seminal hard rock and metal bands of the 80's, Bhoomi are arguably one of the finest exponents of pure, melodic metal anyone is likely to find. Using traditional hard rock and metal as their base, Bhoomi stand out from the crowd with their unique incorporation of three way vocal harmonies into their music, which instantly gives them an identity and sound that is all their own. Throw in some classy songwriting and technical prowess into the mix and you have a band that can make you bang your head with pounding riffs and dazzle you with a catchy and superlatively melodic chorus before you get a chance to catch your breath. Another aspect of the band that has further endeared them to their fans is their lyrical stance, which rages against corruption and champions the cause of the common man.