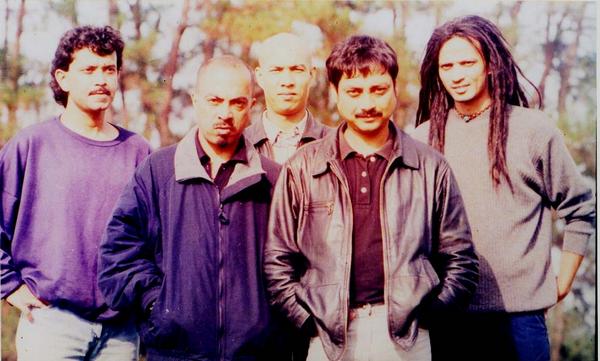 
Mojo is a Blues band from Shillong, formed in 1993. After disbanding the legendary band  'Great Society', guitarist Rudy Wallang with his friends the magical mantle of 'Mojo" was formed, it was as a result of a collective love and feel for roots music that set the binding tour de force. With all band members musically adept and experienced, Mojo was a mature band of artists who had honed their musical and lyrical talents to a degree that set them a dimension apart from the rest of the crowd. After bidding adieu to The Great Society in search of fresher pastures, Rudy Wallang, Ferdy Dkhar, and Sam Shullai performed as Tom, Dick & Harry as they continued their saga in search for the perfect niche. Mojo was born when Keith Wallang and Bob M joined the trio and the rest as they say, is history. Drawing inspiration from great bluesmen, John Lee Hooker, Albert Collins, etc. reggae legend Bob Marley, jazz & funk music, Mojo create music that reflect these influences interpreted with the originality that stamps their art with an identity of its own. The band’s songs spring forth from an array of omnipresent sources such as love, despair, and socio-economic ills, this proactive yet positive approach to lyrics taking the music to its deepest meaning and relevance. Mojo have since disbanded and while Rudy formed the band Soulmate, Sam & Ferdy are now freelance musicians, Keith started Springboard Surprises an event/music promotion firm and Bob is currently CEO, Livelihood Improvement Finance Company of Meghalaya.