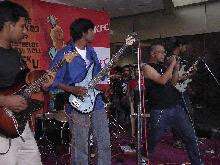 
Nemesis is a Heavy Metal Band from Pune, formed in the summer of 2003. Four friends got together to let their hair down and have a good time. Together they built a repertoire of hell raising covers ranging from guitar oriented heavy metal like Maiden and Metallica to newer bands like SOAD. They started out playing in small clubs like Cyclone but soon focused their attention to playing in competitions and lived up to the literal meaning of their name by proving to be the Nemesis of the competing bands. They won runners up prize at the inaugural edition of the Battle of the bands in Pune, 2004 and at Crescendo 2005. But the jewel in the crown was their victory at the Pepsi Hero Honda Campus Rock Idols where they won the Pune leg and came runners up at the west zone finals beating more experienced bands from Mumbai and Ahmedabad. Hence they were one of the 8 finalists nationwide. They have also been featured regularly in local newspapers and sites like drummingworld .com and have even been featured in the September 2003 edition of the RSJ as an upcoming band to watch out for.