The Salvation Crusade is a Progressive Heavy Metal band from Pune, Maharashtra, formed in 2004. This White / Progressive Metal group started off with a mission to salvage original music. But now is turning towards spreading positive messages through the power of music! This is no cover band but sheer originals. They thrive on variation. "We get bored of doing the same thing over and over again". Each song needs to sound different. They do not want to evolve a signature style and get tied down by it. They want to spread their wings and experiment with everything to rock the world! They want to be 10-bands-in-1!!! Their undaunted spirit continues to dedicate itself to Original Compositions and experiment with various musical genres & styles under rock & metal. The new & permanent White Metal line up has released a single "Miracle By Faith" on India's first ever Online Gospel compilation called Think Again & the 2-track EP called "Save Our Nation" on 30 Apr 2006. The band is also known for their former signature songs - Rest In Peace (ennui.BOMB's We are The Scene Vol. II), Living On (ennui.BOMB's We are The Scene Vol. I) and Schizophrenia. The band believes in its moto - Pray, Believe and Do your Best To The Almighty, Leave the Rest. 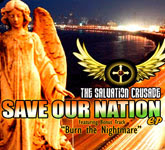